Are you measuring what you think you’re measuring? Could you be measuring something else entirely?

Accurate measurement of variables is essential for business success.  Sometimes, it’s fairly easy to record these variables – sales, revenue, profit.  Other times, it can be very very difficult.  For example, let’s say that you want to hire employees that are smart and conscientious.  How can we measure intelligence and conscientiousness?

In this post, we won’t talk about the worst that could happen, but we’ll discuss a pretty bad outcome: when your measure inadvertently gauges the wrong construct, which could result in a lawsuit.

I should also note that this example comes from an actual consulting experience that I encountered.  The names have been changed, but remember that these things actually happen in industry!

I was once hired along with a full team to review the new selection system of a trendy company.  Let’s call them X-Corp.  X-Corp wanted their selection to measure a construct that they invented: “the ideal X-Corp employee.”  They made a list of the ideal X-Corp employee characteristics.  It included the common constructs like intelligence and conscientiousness, but it also included some unorthodox constructs.  These included hip, stylish, savvy, sleek and so fourth.  X-Corp argued that the ideal employee needed to appeal to any potential customers, and therefore needed to have these characteristics; however, my team was already doubtful about the business relevance of theses constructs.

Even more concerning, X-Corp felt that their survey had to attract people to work for X-Corp.  For this reason, it couldn’t be a traditional survey.  It had to be different and exciting.  Once again, we were doubtful about how exciting a selection survey could be.

When we saw the survey to measure “the ideal X-Corp employee,” we began to worry even more.  The first question looked something like this:

The text of the item read, “Using the scale, please indicate whether you are more like a sports car or a hybrid/electric car.”

Immediately, we asked X-Corp what this item was meant to measure.  Sure enough, they just said “the ideal X-Corp employee.”  We asked which subdimension, specifically, was the item meant to measure.  As they couldn’t respond, we realized that they didn’t really have an idea.  It seemed that they just put things in their survey that they thought would be a good idea without really thinking about the ramifications.

That item was bad, but it wasn’t the worst.  The worst was probably the following item: 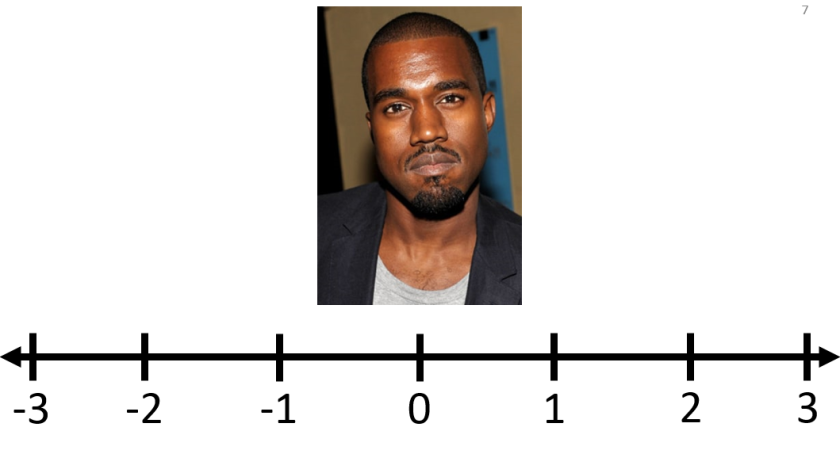 The text of the item read, “Using the scale, please indicate whether you are more or less like Kanye West.”

X-Corp claimed that Kanye West was too narcissistic, and anyone who felt that they were like Kanye were not welcome at X-Corp.  Do you think that Kanye people are inherently worse than non-Kanye people?  Once again, I am guessing that the answer is probably not. Kanye people are probably just as good as non-Kanye people, and perhaps even better in some regards (i.e. creative, hip, etc.).  But can you think of anything else that this item might inadvertently measure?  Let’s look at the graph below, which is similar to the actual results.

As some of you may have guessed, African Americans were much more likely to see themselves similar to Kanye than Caucasians.  This makes sense, as Kanye himself is African American.  Thus, this item partially measures the applicant’s ethnicity.

Remember when I said that those responding that they were more like Kanye were rated as worse applicants?  If this survey went live, that would mean that African Americans would automatically be penalized, thereby resulting in adverse impact.  This would almost assuredly result in a lawsuit, in which X-Corp could not justifiably defend – or, at least, have a very hard time defending that the Kanye question actually represented job performance.  This would have cost the company millions of dollars!

In the end, my team strongly recommended that the company should not use their selection survey, and should instead use a traditional survey.  The company wasn’t happy, and we were never asked to work with the company again.  But, they did guarantee that they would not use their selection system.  While it wasn’t the most satisfying result, I was happy that we were able to stop another case of Statistical Bullshit!

One thought on “Bullshit Measurement”

Got a Story? A Question?

Do you have your own Statistical Bullshit story?  Or did you recently suspect someone of Statistical Bullshit, but you couldn’t quite put your finger on it?  Feel free to email me at MHoward@SouthAlabama.edu with stories, questions, or anything else.  I would love to add your real-world experiences and questions to StatisticalBullshit.com.